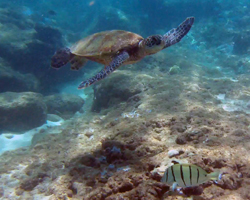 Three Tables beach got its name from the three flat “tabletops” of rock/coral barely breaking the water’s surface just off shore.  As part of the Pupukea Marine Life Conservation District, which stretches from Sharks Cove to Waimea Bay, this little cove is a world-class Hawaii snorkeling location – as long as you’re there in the summer when the wave conditions are flat. 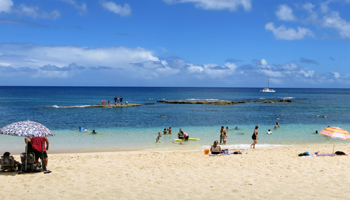 One advantage this location has over the adjacent Sharks Cove is a sandy beach.  Three Tables has one, while Sharks Cove doesn't.  Furthermore, it's a beautiful, wide strip of clean white sand that’s ideal for sunbathing or burying your brother.  And there’s a sandy bottom extending a few meters out into the shore break for maximum water-play enjoyment.  Thus, this is actually an excellent Hawaiian beach and snorkeling spot – a somewhat rare combination. 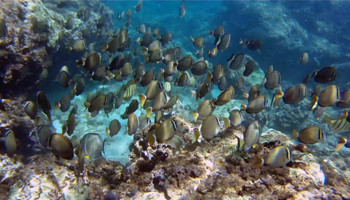 Like Sharks cove, the summertime snorkeling conditions at Three Tables are some of the best you’ll find at any of the Oahu beaches.  The cove is nicely sheltered – excellent for all ages.  I took my kids for the first time when they were ages nine and twelve, and they weren’t nearly the youngest children there.  The water is crystal clear; and it is only one to five meters deep throughout most of the cove.  The marine life is abundant and varied.  During my most-recent visit, we saw schools of more than 100 fish; and we saw a couple of green sea turtles!  Basically, it’s awesome.

Watch green sea turtles swimming. Or click here to open a new window and watch it in HD.

Just in case you're interested... all the underwater shots on this page were taken with my ContourROAM Waterproof HD 1080P Hands-free HD Camcorder Watersport Kit

, which I really like (link opens a new window/tab). The image quality I get for that price is worth every penny! It might be a worthwhile investment for your Hawaii vacation. 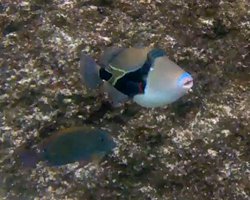 Another fish we saw several of at this North Shore Oahu beach is the humuhumunukunukuapuaa.  Before you freak out at the length of that word, try sounding it out.  It’s actually fairly easy to say because almost all of the syllables repeat: [hoo-moo-hoo-moo-new-koo-new-koo-ah-poo-ah-ah].  See… that’s not so bad.  But I’d still bet money that you can’t say it five times fast!  If saying it one time slowly is still giving you trouble, though, you can also call it the rectangular triggerfish (Rhinecanthus rectangulus).  If that’s still too hard, just call it what the name means: fish with a snout like a pig (it even grunts like one).  So what’s the big deal with this weird-looking little guy?  It’s the Hawaii state fish (temporarily from 1995-2000, and permanently since 2006). 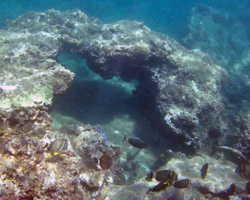 Even the variety of corals and coral formations make this location an underwater site to see!  Obviously, you’ll see the tabletops.  But in addition, there are coral arches and caves.  There are trenches and outcroppings.  One of my favorite formations looks like a pointing hand.  I was looking at the pointing hand when I realized it was pointing at a turtle (see bottom of this page).  That was pretty cool. 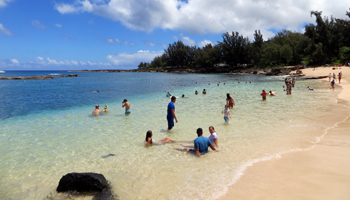 Unfortunately, I forgot to take comparison/contrast photos at Three Tables last winter when the surf got big.  That’s largely because I’m in the habit of not going to this beach in the winter.  And you should avoid it too.  Look at the winter contrast photos at Sharks Cove and Waimea Bay and you’ll understand why.  Summertime, is generally flat and calm – ideal for your snorkeling Hawaii adventure vacation!

However, when the winter surf gets big, it can be brutal!  Those three tabletops suddenly become three cutting boards; and you’ll be the meat, if you get in around them.  Don’t do it.  Getting shredded or killed is a horrible way to end your Hawaii vacation!  Winter surf on the Oahu North Shore is for watching – not for tempting fate.  And you’ll never see anything when the water’s that churned up anyway.

Tips for a fun and safe Hawaiian adventure at Three Tables: 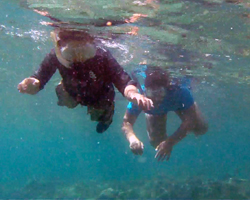 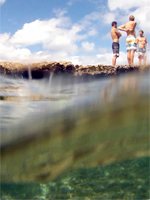 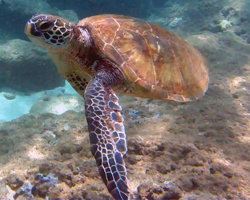 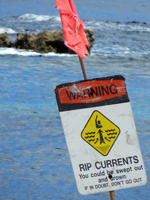 Disclaimer: Stupidity and carelessness can kill you.  Heed posted warning signs.  Use your brain and take responsibility for your own safety.  Know the limits of your ability and stay within them.  Watch your children carefully at all times.  Stay alive and have fun.  I’m not recommending this Hawaii attraction.  I’m simply giving you information about all Oahu tourism activities.  The decision to experience this Hawaii adventure is your own.