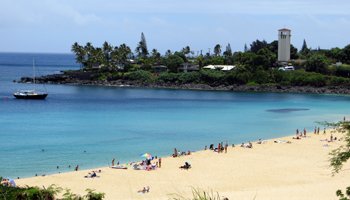 With its broad, white sandy shore and crystal-clear aquamarine water, Waimea Bay Hawaii is easily one of the most idyllic beaches on earth!  Ever since the first westerners landed on Oahu at Waimea in 1779, the unique beauty of this legendary Hawaii attraction never ceases to amaze. 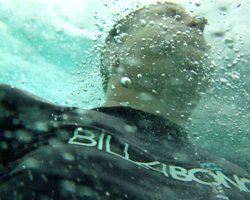 Furthermore, this world-famous North Shore Oahu beach also packs a world-class one-two punch when it comes to extreme activities – making it a “must-see” for your Hawaii adventure vacation!  But before you can choose the activities that appeal most to you, you’ll first need to determine when you’re going to be here.

At Waimea Bay, the seasonal water conditions have the final word on which activities are right for you.  That’s because from summer to winter, this epic Oahu beach undergoes a seasonal transformation comparable to Dr. Jekyll and Mr. Hyde… 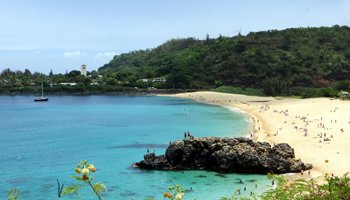 In the summertime (approximately April to September), when there is generally no surf anywhere on the north shore, Waimea Bay is a fantastic place for your family’s Hawaii beach vacation.  The sand seems to just stretch forever (continuing into the shallows for ideal water play with no reef shoes required)!   The calm conditions are not only perfect for young children to safely splash around – they’re also excellent for snorkeling and stand-up paddle boarding.  The bay is well-sheltered from currents and other open water hazards.  Basically, it’s practically perfect in every way – in the summer. 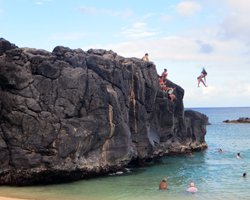 And then there’s the rock – a big black monolith sticking up to approximately seven meters out of the sand and water on the left edge of the bay (facing the water from shore).  I promised you some Hawaii extreme activities, and most of those revolve around the rock.  Your introduction to cliff jumping/diving should probably begin here.  This is the Goldilocks cliff jump – not too high and not too low.  It’s approximately twice as high, and several times more thrilling, than the rock at Sharks Cove.  But it’s just a little more than half as high, and significantly less scary, than the rock at Kapena Falls.  It’s just high enough to seem a little intimidating without really threatening any serious danger. 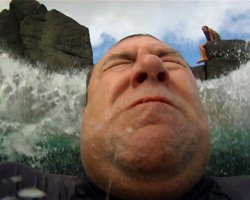 The rock at Waimea Bay is easy to climb from the end that appears to have run aground on the beach; and its smooth surface is mercifully easy on your bare feet.  Better still, it’s even easier to get back down again – if you have the nerve.  Anywhere past the approximate middle of the rock is generally a safe spot to catch the express elevator down to the water! 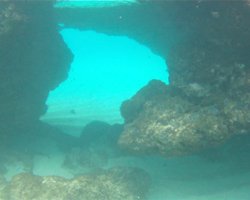 Another exciting feature of the rock at Waimea Bay is that there’s an underwater tunnel that allows you to swim right through it!  If you’re not quite ready to swim the underwater lava tunnels at Sharks Cove, this might be more your speed.  Approximately two-thirds of the way out into the water – almost exactly at the spot where most people jump – and a little less than one meter underwater, this little cave is about the same size and length of a large sofa.

Once you know where this tunnel is located, you can trick your friends on the beach by jumping down in front of the cave entrance and then, without re-surfacing, swim through it to the other side.  Just make sure nobody’s jumping off the back side of the rock where you’ll be exiting the tunnel.  You really don’t want somebody to land on you because they don’t know you’re there. 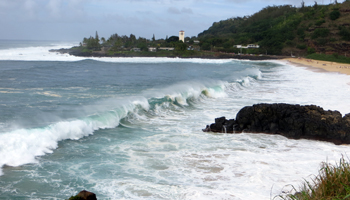 If you go to Waimea Bay when the winter surf is getting big (approximately October to March), you’re in for a much different extreme adventure!  Just compare the pictures at left and above.  It’s not uncommon to have waves crashing across the top of the jumping rock and/or a five-meter shore break (measuring by wave face) crashing into the sand across the entire width of the bay!  Trust me when I say that winter at Waimea Bay is for experts only! 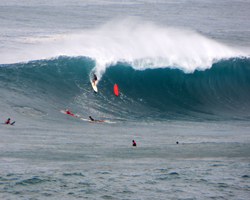 The winter surf at Waimea can get as big as about 15 meters (measuring by wave face)!  And there are a lot of surfers skilled enough to ride these monsters!  You, however, are not such a master.  Don’t plan on trying out your new boogie board in these conditions.  Just by watching, you can get all the excitement of man vs. Mother Nature without the tons of seawater pushing you down toward the seafloor.  And you’ll be in good company... 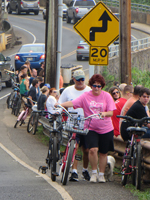 One thing’s for sure: when the waves get big, there are a lot more spectators than there are surfers.  They pack the beach and line the road on both sides of the bay for hours just to see the greatest surfing spectacle on earth!

Unfortunately, when the surf gets big, the normally inadequate parking gets downright horrible!  Unless you beat the crowds to the bay at the crack of dawn, you’re unlikely to find any available parking in the lot.  That’s when you’ll discover that there really isn’t any parking elsewhere.  There’s no parking along the roadside around (or anywhere near) the bay; but people will do it anyway, which will pinch the traffic and cause somewhat major delays.  Meanwhile, the police will patrol the whole area every few minutes and ticket or chase-off the worst offenders.  Many more people will park at the church that overlooks Waimea Bay.  That too is not allowed; and sometimes the church staff is vigilant about running-off non-parishioners. 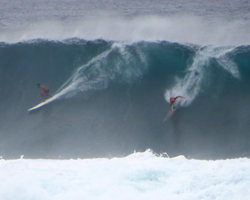 It’s during these times that the Waimea Valley (across the street from the entrance to the beach) will put out a sign offering pay-for-parking.  All I can say is: get there early or be prepared to walk/pay.

If you’re here in December through February and the surf gets truly huge (face heights greater than 10 meters), you might even get to watch the Quicksilver in Memory of Eddie Aikau Big Wave Invitational Surf Contest.  This is the biggest of the big for the best of the best!  Since its inception, this contest has only been held one of every three years due to insufficient wave height on the other years.

Tips for fun and safe Hawaii adventures at Waimea Bay: 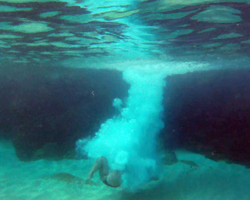 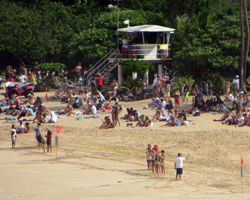 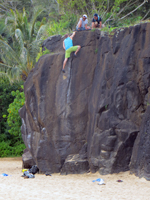 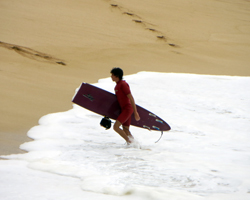 Disclaimer: Stupidity and carelessness can kill you.  Massive walls of water stretching across the entire bay can also do the trick.  Never turn your back to the waves.  Heed posted warning signs.  Watch your kids like a hawk.  Use your brain and take responsibility for your own safety.  Know the limits of your ability and stay within them.  I’m not recommending these activities.  I’m simply giving you information.  The decision to do these activities is your own.  Don’t give in to peer-pressure if these activities are beyond your ability.  Just volunteer to take the pictures, and live to happily enjoy another Hawaii vacation day!