Fun and FREE Hawaii Things To Do in Honolulu! 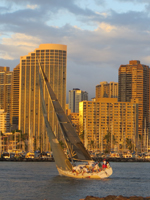 Honolulu, the state’s political and economic seat, is another great place to find free fun for your Hawaii vacation.  Better still, all of the following activities are located just minutes from Waikiki!  So if your time is limited or you’re just trying to keep costs low, you can’t go wrong with these Honolulu tourism attractions…

Live Honolulu Entertainment: Enjoy a daily free hula show, musical performances and more at Ala Moana Shopping Center.  Then venture out into other parts of Honolulu for free concerts and more.

Magic Island Oahu: One of the island’s most popular parks with a well-sculpted beach.  Every Friday, watch a sunset sailboat regatta.  Then stay for a fantastic view of the fireworks!

Ala Moana Beach Park: A beautiful park attached to a gorgeous white-sand beach.  This is a favorite recreation spot for many Oahu residents.

Kakaako Waterfront Park: Enjoy a picnic, watch the surfers, or go for a walk.  Bring a piece of cardboard or a block of ice, and let the kids slide down a hill!

Whale watching: Primarily from January to March, look for spouts or splashing about!  Just casually looking out to sea, I’ve seen whales from Ala Moana Shopping Center and various tall towers.

Manoa Falls: Hike through a tropical rainforest to a picturesque waterfall.  This is one of the easiest (and muddiest) trails on Oahu.

Waahila Ridge: Feeling adventuresome and have at least five hours to spare?  You can see nearly half the island from the top of the mountain, but getting there is grueling.  Or you can just relax in the scenic state park.

Kama’aina Sundays at Iolani Palace: Before annexation by the United States, much of the recorded Hawaii history centered on the monarchy.  Now, on one Sunday of each month, kama’aina can tour the royal palace for free.

Mauna Ala: See the royal mausoleum of Hawaii’s kings and queens from the Kamehameha and Kalakaua dynasties!  Located in beautiful Nuuanu Valley.

Chinatown Honolulu: Stroll through the biggest and the oldest Chinatown in the United States.  See many historic and cultural landmarks; and enjoy a unique window-shopping experience.

Izumo Taisha Mission: Located on the Northwest corner of Chinatown, this Japanese Shinto shrine is a place of simple beauty and tranquility.

Cathedral of Our Lady of Peace: Whether you’re interested in religious art and architecture, or its history as the location of Saint Damien’s ordination, this 19th-century downtown landmark has it all.

Kawaiahao Church: Often referred to as the Westminster Abbey of Hawaii or the State Church of Hawaii, portions of every worship service are still conducted in the Hawaiian language.

Hawaii State Art Museum: Located across the street from the Hawaii state capitol, this museum features many beautiful examples of fine local arts.

Honolulu Museum of Art: Though generally inexpensive, this Asia-Pacific art museum features free admission on the first Wednesday and third Sunday of every month.

Honolulu Police Museum: Discover the history of law enforcement in Hawaii.  It’s not exactly as seen on Hawaii FIVE-0 and Magnum P.I.

Punchbowl Crater: The National Cemetery of the Pacific, located inside a dormant volcano, features magnificent mosaics and a breathtaking view over the downtown business district.

King Kamehameha statue: It’s on every episode of Hawaii FIVE-0, and its twin is one of two Hawaii statues in the National Capitol at Washington DC.  See the King who united the Hawaiian Islands!

Hawaii State Capitol: Don’t look for a dome!  The Hawaii Capitol is designed to symbolize our volcanic islands rising from the ocean.  Look for the statue of Saint Damien, which is also on display at the Nation’s capitol.

Liliuokalani Botanical Garden: One of the free City and County of Honolulu Botanical Gardens, this Hawaii attraction is located near the heart of the city and features native Hawaiian plants along a section of Nuuanu Stream.

Lyon Arboretum: Take a walk on the wild side – through nearly 200 acres of tropical rain forest.  This botanic garden features 5,000 species of palms, heliconias, gingers, bromeliads, and other exotic flora.

Kyoto Gardens: Located inside the Honolulu Memorial Park, the dominant feature of this garden is the three-tiered Sanju Pagoda.

Puu Ualakaa State Park: If you remember “Inspiration Point” on Happy Days, you’ll know exactly why this park is popular!  Get a panoramic view over the city.

Aloha Tower: Once the tallest building in Hawaii, Aloha Tower is the second most famous landmark in the city's skyline.

Royal Hawaiian Band: Hear the kings’ band perform live on most Fridays (weather permitting) at the Iolani Palace grounds and/or on some Sundays at the Kapiolani Park Bandstand.

Lantern Floating Hawaii: Every Memorial Day at Ala Moana Regional Park, remember those who have passed on at one of the largest and most unique observances in the nation!

Kamehameha Day: If you’re here in June, commemorate the great king who united the Hawaiian Islands with a lei draping ceremony at his statue and a floral parade!