Sharks Cove Hawaii in Summer is Amazing for Diving! 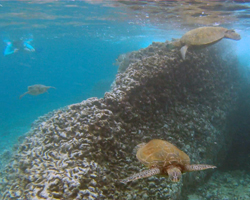 I’ve heard that Sharks Cove Hawaii got its name because the outline of a reef beyond the mouth of the cove looks like the silhouette of a shark (when viewed from above); and because white tipped reef sharks live in the surrounding reefs, and because the jagged lava rock that forms this cove can do as much damage as a shark’s teeth... 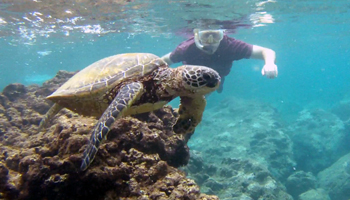 Well, I’ve never flown above the reef in this area, and I’ve never seen any sharks of any kind at this particular location.  The lava rock around the cove truly is ridiculously sharp – but you find that everywhere in Hawaii – so this last theory is just ridiculous.  In short, I’m not sure that anybody knows for sure why it’s called Sharks Cove, but you probably don’t need to worry about a shark encounter.  What you do need to worry about is the season…

Watch green sea turtles swimming. Or click here to open a new window and watch it in HD.

Just in case you're interested... all the underwater shots on this page were taken with my ContourROAM Waterproof HD 1080P Hands-free HD Camcorder Watersport Kit

, which I really like (link opens a new window/tab). The image quality I get for that price is worth every penny! It might be a worthwhile investment for your Hawaii vacation. 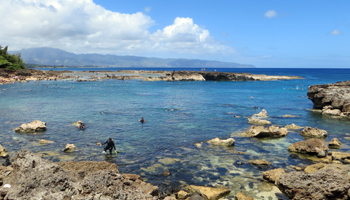 In the summertime, when there is generally no surf on North Shore Oahu, Sharks Cove Hawaii is a world class diving (snorkeling and scuba) destination!  The water is crystal clear and only one to five meters deep throughout much of the cove.  The sea life is abundant.  We’re talking hundreds of fish everywhere and a lot more (see photos)!  The cove is well-sheltered from currents and other open water hazards.  Basically, I’d have to say it’s one of the two or three best Oahu beaches for snorkeling – in the summer… 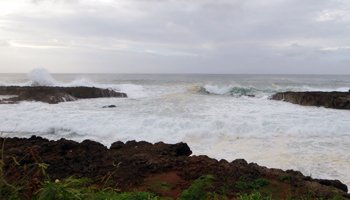 On the other hand, if you go to Sharks Cove Hawaii when the winter surf is getting big, the conditions are much more suitable for dying.  Just compare the pictures at left and above-left.  Those waves against those rocks would smash you into a bloody and broken ball of goo!  That’s a terrible way to end your Hawaii vacation.  Do not under any circumstance go into the water at Sharks Cove when the surf is up.  I don’t care how adept you are in the water… that’s just foolish.  I’ve never been dumb enough to do it, and I don’t know anybody else who has.  You shouldn’t be the first. 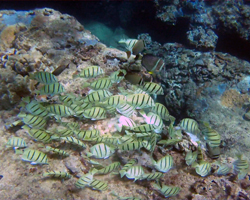 For most visitors, Hawaii snorkeling is the adventure of a lifetime!  If you fall into that category of people, grab your dive gear and go have some fun!  Maybe skip to the bottom of this page for some helpful tips.  However, in case you’re interested: swimming around looking at fish (and maybe a reef shark if you’re really lucky) isn’t the only Hawaii adventure activity at this unique North Shore Oahu beach! 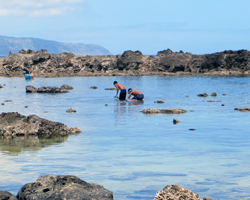 Next to Sharks Cove Oahu (to the left when facing the ocean from shore) are the Pupukea tide pools.  Wading and exploring in these is really more of an adventure for really young children than for anybody over the age of four.  But, I suspect that if you don’t have snorkeling gear and you’ve never seen any ocean life, even this could be exciting stuff! 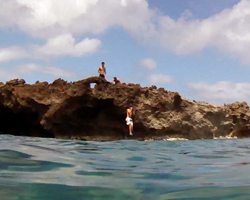 Beyond the tide pools on the left wall of the cove, there’s a rock ledge that’s suitable for cliff-jumping.  The rock is only about three meters high, so this is definitely a beginner jump.  And quite frankly, the lava rocks you have to walk across to get to the jumping rock are so sharp that I tend to think the difficulty outweighs the thrill.  Nevertheless, it’s always fun to jump in the ocean; and the climb is a lot better when you wear reef shoes.  Just think of it as practice jumping for the rock at Waimea Bay. 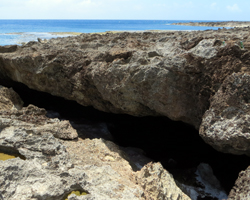 For the die-hard Hawaii vacation adventurer, however, I think the coolest extreme feature at Sharks Cove Hawaii is the underwater tunnels through the rock wall on the right side of the cove.  Lava tunnels are common everywhere you find lava rock.  They form because surface lava cools and hardens while molten rock still flows below.  Then when the lava stops flowing, it can leave an empty tube behind.  Lava tubes are a unique natural spectacle that few people outside of Hawaii ever get to see.  Even fewer people get to swim through an underwater lava tunnel.  And one such tube pierces the rocks at Sharks Cove… 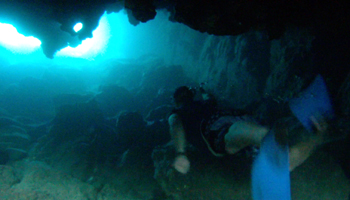 You can see the underwater tunnel without having to swim through it.  To do so, just walk up onto the dangerously jagged rocks on the right side of the cove.  Look for a trail of poured concrete “steps” to make the path easier.  Near the middle of the rocks is a cave entrance to the lava tunnels.  You’ll know you’ve found it because of the visible water inside.  You can climb down into the cave, drop your head below the water, and see the light where the tunnel exits out to the open ocean.  This tunnel is as wide as a two-car garage; and it’s approximately 10-meters long! 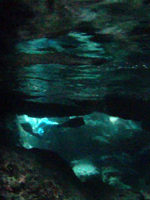 Within the same cave exposed portion of the cave, instead of facing out to the open ocean, turn and look in the direction of the highway.  The tunnel continues (though much smaller) all the way to the patch of sand in the back-right corner of the cove.

The underwater lava tunnels at Sharks Cove Hawaii are popular with scuba divers; but it’s also possible to swim through them without any air tanks.  I’ve gone through both of these sections of tunnel without any scuba gear (though not during my most recent visit, because I wasn’t in my best state of fitness at the time).  If you’re thinking of attempting the same, I would just caution you to make sure there is no surf to cause currents that might hinder your progress.  Actually, I have more cautions below.

Tips for a fun and safe Hawaiian adventure at Sharks Cove Oahu: 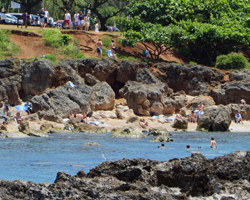 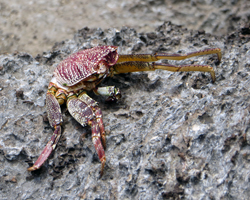 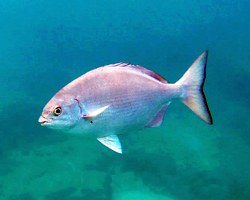 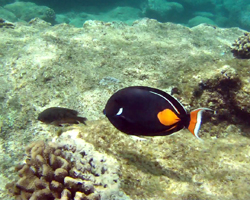 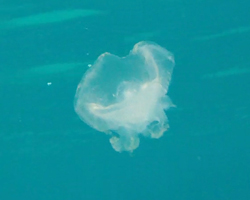 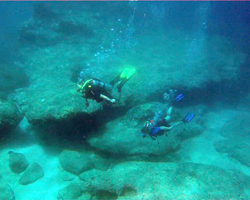 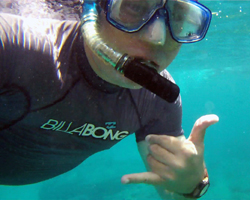 Disclaimer: Stupidity and carelessness can kill you.  Heed posted warning signs.  If you can’t hold your breath long enough to swim the length of most recreational swimming pools underwater, you have no business attempting to swim through these caves.  And if you get claustrophobic or prone to panic, it would be a mistake to attempt some of these activities.  Use your brain and take responsibility for your own safety.  Know the limits of your ability and stay within them.  I’m not recommending these activities.  I’m simply giving you information about them.  The decision to do these activities is your own.  Don’t give in to peer-pressure if these activities are beyond your ability.  Just volunteer to take the pictures, and live to happily enjoy another Hawaii vacation day!